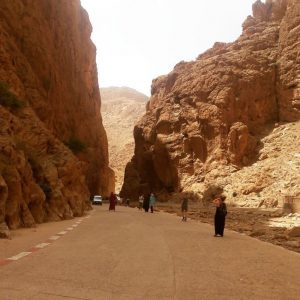 Depart at 08:00 from Marrakech to Dades valley via the High Atlas mountains passing through Tizi n’Tichka in the high Atlas Mountains, we will have time to stop and enjoy impressive landscapes and Berber hamlets, we will  visit the universal Heritage Site of Ait Benhaddou Kasbah as it has been named by UNESCO in 1987. This Berber Kasbah which has been used as a very important destination for international film-makers for more than 20 films was also one of the most important fortress strongholds on the old Salt Road where caravans brought slaves, gold, ivory, salt and silk from sub-Saharan countries to Marrakech and beyond. We’ll pass through Ouarzazate, or what we call the Hollywood of Africa since it has also been a very famous destination for film-makers, after Ouarzazate we will continue to Dades valley, trough the Megoun, Skoura (berber villages around the valley) we will spend the night in the Dades valley.in the hotel 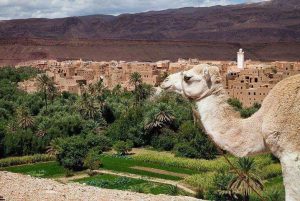 After breakfast, we will go from the Dades gorges to the Erg Chebbi Sahara desert in Merzouga. Berber villages are scattered along the way, we’ll pass through Tinjdad, Jorf and Erfoud where we willl feel the beginning of the Saharan oasis of Tafilalet, and then we continue to Merzouga, after relaxing a few minutes in Merzouga, we will go to ride the camels who are waiting to take us on an adventure in the sand dunes. We will spend the night in a camp (Nomad berber tents) with drumming an amazing music in the middle of the Sahara, this is a great opportunity to take lovely pictures of the sunset and sunrise, when we arrive at the camp we go to a high dune to see the sunset, we will spend a nice night in camp.

After an early sunrise, we will ride the camels back to Merzouga, after a shower and breakfast we’ll returne to Fes. We will stop on the way to drink a cup of tea with a nomadic family before passing through the High Atlas mountains again. We will stop in a town called Midelt where we’ll have lunch. This town is a very impressive mountain city at 1489 meters of altitude, well situated beneath the Jbel Ayachi (3737 m). In the afternoon we’ll continue to the legendary city of Fes. Arrival at Fes which is the end of the trip.